This FieldTalk Modbus Slave Library for .NET allows you to incorporate Modbus slave functionality into your your VB.net and C# programs. 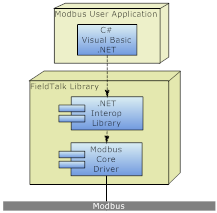 The two components are contained in separate files: FieldTalk.Modbus.Slave.dll contains the .NET Interop Library and libmbusslave.dll the native Modbus Core Driver. These two library files have to be deployed with your application.

For .NET Core, the deployment and loading of the native code library is taken care of by .NET core's package management. This works for Windows as well as for Linux platforms.

For classic .NET Framework 4.0 and 2.0, the deployment of the native code library is taken care of by the FieldTalk.Modbus.Slave.prop file which the NutGet package manager will automatically add to your project. With that file, when compiling, a bin/x86 and a bin/x64 subfolder is created in the bin directory and the native libraries copied into these subfolders. When the .NET assembly is loaded, the correct native library will be loaded from one of these two sub-folders.

For the .NET Compact Framework (Windows Embedded Compact, Windows CE and Windows Mobile) the deployment of the native libray must be done manually.

The library's API The library is organised in two categories of classes.

The second category of classes is Data Providers classes. Data Provider classes represent the interface between the Server Engine and your application.

In order to use one of the three slave protocols, the desired protocol flavour class has to be instantiated and associated with the Data Provider. The following example creates an RTU protocol and links a data table to slave address 20:

After a protocol object has been declared and started up the server loop has to be executed cyclically. The Modbus slave is ready to accept connections and to reply to master queries.